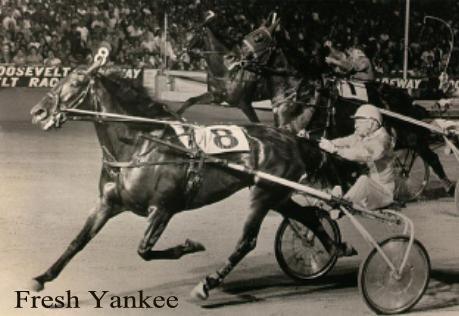 Born June 26, 1917 in Alberton, P.E.l., Joe O’Brien was perhaps the greatest driver and trainer of harness horses the world has ever seen. Son of Harry O’Bnen, Joe (along with brothers Claude, Lloyd and Ray) were introduced to the sport of kings at an early age. He won his first race at the Summerside track in 1933, at age 16, with a horse called “Mickey Mouse” who was owned by the father of John (the Realm) McNeill.

He went on to win the British Consols trophy, awarded to the leading driver at Old Home Week in Charlottetown, on numerous occasions in the 1940’s until he left for greener pastures in the U.S.A. in 1947.

As a driver, he won 4,285 races and money earnings of 20.4 million. Also an expert trainer and conditioner of horses, his vast experience in the sport made him an astute judge of racing talent as well. Although he left Canada and made his home in California, O’Brien maintained close ties with Canadian horsemen. He trained and drove some of the Armstrong Brothers’ finest race horses for some 15 years. That association prompted a tribute from Dr. Glen Brown, the farm manager for the Armstrongs. Said Dr.Brown: “The most remarkable thing about Joe was his competitive nature on the race track. He was a different man out there. He drove every race to win, asking no quarter and expecting none. Nobody was his friend in the bike.”

It was generally agreed that no driver in history ever had a greater sense of timing and knowledge of how much horse he had left. Horsemen paid him the highest compliment of all by saying he drove like he had a stopwatch in his head. Even in his senior years, O’Brien was the most sought after driver for time trials at Lexington, Kentucky.

Joe always remained loyal to Scott Frost, the 1955 triple crown trotting champion, as his favorite horse of all time. For the Armstrong Brothers, Joe handled Armbro Flight, the Roosevelt International winner in 1966 and the champion of the Dexter Cup and Kentucky Futurity in 1955. He gained widespread stature with the superb mare, Fresh Yankee, the Roosevelt International winner in 1970 and the sport’s first million dollar winner who went 62 races without ever being worse than second place. 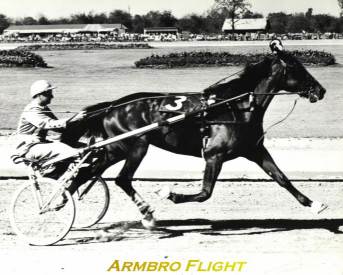 In all, O’Brien won the Kentucky Futurity five times, captured the Hambletonian twice, winning with Blaze Hanover in 1960 after Scott Frost’s triumph five years earlier. He first claimed the Little Brown Jug in 1958 with Shadow Wave and then repeated the feat in 1973 with Melvin’s Woe. His major Canadian triumphs included the Queen City Pace, Maple Leaf Trot and Provincial Cup twice each along with the Canadian Pacing Derby with Horton Hanover in 1970 and the Canadian Trotting Classic with Ima Lula in 1977. Some of the other great horses O’Brien was associated with included Armbro Jet, Armbro Ranger, Dream of Glory, Flower Child, Governor Armbro, Legend Hanover, Armbro Nesbit, Diamond Hal, Flight Director, Storm Damage and Sunbelle. O’Brien proved his ability as a trainer quite early in his career when he took Dudey Patch, a broken-down 11 year old and turned him into a Canadian champion.

The late Johnny Conroy was Joe O’Brien’s boyhood idol. “Johnny was a great help to young people, myself included,” O’Brien told Margaret Neal in an interview. “When I saw the way he ran a stable, the way he kept his horses looking and his equipment, it was something to pattern myself after. I always wanted to have a good looking

Born into a harness racing family made it easy for Joe to develop his great love for the sport but he had the blood of a champion flowing through his veins and when he got together with horses similarly endowed, it was an invincible duo.

The fateful decision that was to determine the course of his career came for Joe O’Brien in the winter of 1936. It was the year after Joe graduated from high school. His mother wanted him to attend college and study veterinary medicine but he was resolved to pursue racing horses and college simply would have slowed his progress.
The catalyst for Joe came in the form of a letter from William T. Latta of River Hebert, Nova Scotia, to Joe’s father Harry asking if he or one of his sons would be interested in training his horses. Harry replied that no O’Briens were available. 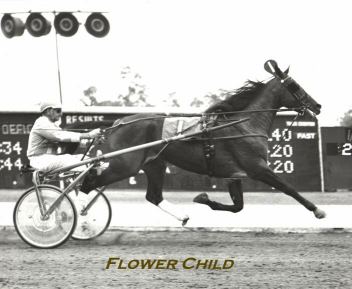 Joe gave the offer an awful lot of thought and then, without consulting his father or mother, wrote a letter to Latta applying for the job. He conveniently neglected to state his age 19 but emphasized he was an experienced horseman.

Latta wrote him back to confirm his hiring. It was an apprehensive Joe O’Brien who approached his dad and advised him that he intended to leave home to work for Latta. One sentence dispelled Joe’s fears, however, and put his father’s official stamp on the project.

“How you fixed for money?” his dad inquired. Joe was almost flat broke with $5 to his name but he had no intention of giving his father any chance to change his mind. The $5 got Joe from Alberton to Summerside, some 50 miles distant, and the home of brother Claude, who staked his brother the rest of the way, about 250 miles in all.

Joe, who stood five-foot-four in his hob-nailed boots and weighed 100 pounds, went directly to see his new employer and was directed to the second floor where Latta was in bed in ill health. Latta was a little surprised at O’Brien’s size but waved towards the barn, saying: “You might as well get to work. The horses are down that-away.” That was not the end of O’Brien’s problems, however. Latta had a half dozen horses, only one of which had ever been broken.

Walking down the row of stalls, behind the horses, Joe stopped at Direct L.’s stall. Direct L., a huge stallion, promptly struck out with his hind feet and missed the new trainer by a yard. Joe promptly reversed his field, approaching from the front. This time Direct L. lashed out with his fore feet and missed by a foot. Joe became more determined than ever that he would not be intimidated. The horse thinks he can bully me just because I’m small, Joe said to himself, and decided to try out some new strategy. He walked up to the end of the barn and came marching back pounding his hob-nailed boots as hard as he could on the floor boards and hollering at the top of his lungs. This time Direct L. missed by only six inches.

Joe gulped and made another big decision. He either had to master Direct L. at once or be forced to tell Latta he just couldn’t handle the job. Joe O’Brien’s tenacity was put to the test early. He promptly grabbed Direct L., led him from the stall, hitched him to the cross ties and then backed him into a high wheel sulky. It took a few hours but O’Brien broke and drove Direct L. before the end of the day.

“No pain sitting in the sulky – only when I move”

Another story that typified O’Brien’s courage and determination occurred during the 1976 Adios at The Meadows. Most of his career, O’Brien proved to be undaunted by injuries, even the serious kind. But no career injury brought more excruciating pain than the one O’Brien suffered less than an hour before he was to drive Armbro Ranger in the Adios.

During an earlier race on the card, a horse behind O’Brien stepped into his sulky and sent him into a twisting fall. Joe landed hard and felt a sharp pain as the rest of the field pounded past him. “It shot all through my groin and up into my stomach,” he said later. It was several weeks before O’Brien learned he had suffered a cracked pelvis.

But with the Adios about to get under way, O’Brien had no time for mere details. Gritting his teeth against the agony, it simply never occurred to the wealthy driver that he could afford to ask for a replacement and seek medical care. He had a job to do with Armbro Ranger and he intended to do it. It wasn’t going to be easy because another driving great by the name of Stanley Dancer had the fastest pacing colt of the year ready in Keystone Ore.

In the first elimination, O’Brien spurted away from all rivals to win in a track record 1:56.3. That mark lasted all of an hour before Keystone Ore fulfilled Dancer’s expectations with a world record of 1:56 flat. The top four finishers from each heat qualified for the final. 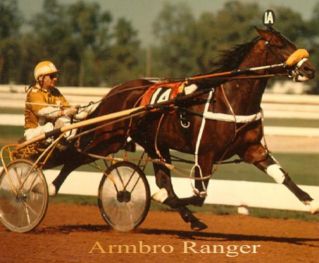 O’Brien drew the rail position inside Dancer and barely managed a thin smile. The painkillers he took were having little effect, and he was bent forward as he tried to stand in the paddock.

“There’s no pain sitting in the sulky,” he insisted. “It only hurts when I move.” However, the general consensus of opinion was that O’Brien would need a lot of motion to beat Dancer.

O’Brien raced immediately to the front, hanging Dancer on the outside in a fierce 27 second quarter. Past the quarter, Dancer tucked in behind O’Brien, who maintained an aggressive pace. When Keystone Ore moved outside again in a desperate bid for the lead, his charge fell short by a head. O’Brien and Armbro Ranger won in 1:56, tying the world record set in the eliminations.

It was undoubtedly the first such record followed by the strange sight of the driver being helped from the sulky by several grooms. O’Brien scarcely paused to contemplate the pleasure or the pain of the moment. He immediately eased his aching body into a car for a ride to Columbus where he was to drive his aged pacing champ Nero.

For 10 days after the accident, O’Brien continued driving and hurting, taking advantage of his spare time to soak in hot tubs. When he finally did see a doctor in Indianapolis, the cracked pelvis was discovered. He was advised to take a few months off and get plenty of rest. But O’Brien never missed a day’s driving. His raw display of courage is discussed with awe by horsemen to this day.

Once asked about the secret of his success in harness racing, O’Brien had a simple answer. “I think the biggest thing in the early part of my career was that I just worked so hard at it,” he replied. “I just made harness racing my one and only goal, and that was the only thing I did or wanted to do. As a result, I probably worked much harder than I should have.”